The Best Pina Colada Recipe to Bring the Caribbean Home 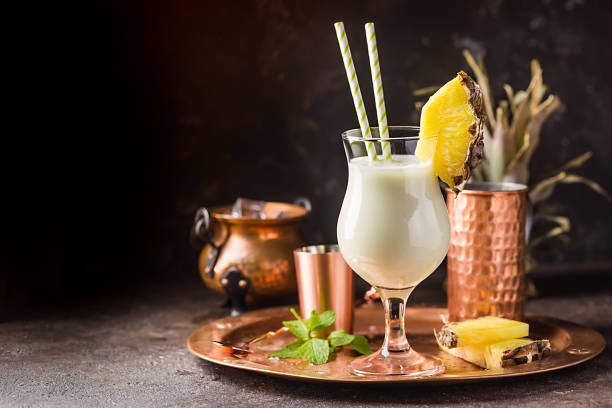 Looking to bring some of that laidback Caribbean lifestyle into your living room?

While you can’t fill your home with powdery white sand and crystal clear water (at least we don’t recommend it), there is another way to bring those dreamy Caribbean vibes home: getting drunk off Piña Coladas.

Whether you’ve just got back from a tropical getaway or you’re prepping for a chilled-out island escape, guzzling down an icy Piña Colada or two is the very best way to experience the charms of the Caribbean vicariously.

A tantalizing mix of silky smooth coconut cream and tangy pineapple juice, this exotic white rum-infused concoction encapsulates those chilled out tropical vibes to a tee.

And apart from being incredibly tasty, it’s super easy to make at home to savor with your friends.

Of course, you won’t get to kick back on a pristine white sand beach while watching a technicolored Caribbean sunset. But if you can at least lay down in your sunny yard and crank up the Piña Colada song with this tasty drink in hand; you’re already halfway there.

Where Does The Pina Colada Come From?

Unbeknownst to many, the Pina Colada doesn’t come from the Caribbean. Although the history books are divided, many believe a Puerto Rican mixologist by the name of Ramón “Monchito” Marrero Pérez first came up with the vibrant concoction back in 1954. Monchito, who was working at the Beachcomber Bar in the luxurious Caribe Hilton Hotel in San Juan, may have designed the very first Pina Colada as part of a competition to come up with the hotel’s signature drink. The tasty cocktail won first place and Monchito continued serving it until he retired in the late 80s.

As the only luxury accommodation in the region, the Caribe Hilton Hotel became a hangout for wealthy aristocrats intent on exploring this exotic part of the world. These cashed-up globetrotters spread word of the enticing concoction and thus the legend of the Piña Colada was born. The hype intensified when Hollywood starlet Joan Crawford claimed that drinking a Piña Colada “was better than slapping Bette Davis in the face.”

Other Piña Colada historians suggest a fellow Beachcomber bartender invented the drink when he was forced to ration coconut cream due to a regional shortage. A third theory states the cocktail was born in San Juan’s Restaurant Barrachina during the early 60s. Its proprietor convinced a skilled Spanish bartender to move to Puerto Rico from Buenos Aires to work in his establishment, where he allegedly invented the drink in 1963.

Regardless of which of these is true, we do know for sure that the Piña Colada hails from Puerto Rico and that it’s damn delicious. In fact, Puerto Rico designated the fruity flavor sensation as its national drink in 1978, and the country celebrates National Piña Colada Day every July 10.

Now we’ve had our history fix, let’s take a look at how to make a killer Piña Colada.

I’m a stickler for authenticity, so I’d be inclined to go with the original that Monchito invented in 1954. Author José L. Díaz de Villegas published it in a recipe book, in which he claims several of the late Monchito’s close friends have confirmed it to be the real deal.

The best thing about this recipe is that it’s lip-smacking delicious and super easy to make. With just a handful of ingredients to work with and a few simple steps to follow, even a novice mixologist could whip up a refreshing batch in no time.

The Best Rum for A Piña Colada

The ideal white rum to use in a Piña Colada depends on your personal preference and budget.

Those who prefer lighter rums should opt for a Caribbean product, while stronger and more vodka-like flavors are the hallmark of a Puerto Rican rum.

Bacardi Silver offers a smooth, easy-drinking taste at a low price point, whose sweetness complements the tangy citrus flavor of the pineapple juice.

If you don’t mind spending a little more, this vintage Jamaican rum goes down a treat with its palpable molasses undertones and fruity aroma.

Another superb high-end option, this cask-aged Caribbean number is all about those coconut, citrus, and vanilla undertones.

Get a quote and start planning your All-Inclusive Vacation, Wedding or Honeymoon today.
Get A Quote


and get news and deals delivered right to your email so you never miss an All-Inclusive Discount.